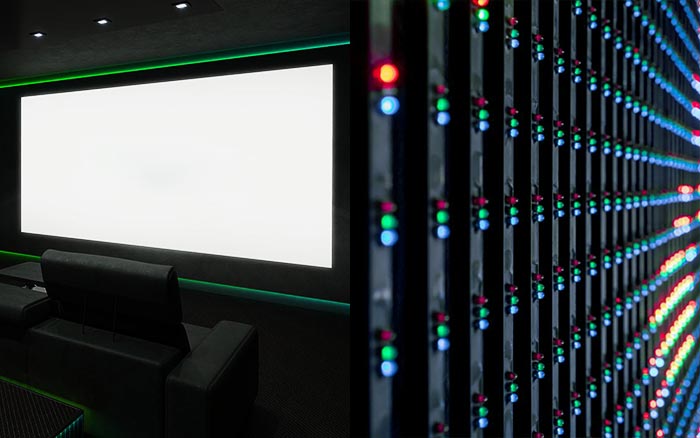 Direct view LED displays are great for large venues with high levels of ambient light. But there is an alternative way to deliver high-quality images on big displays! A way that will not only save you time and money but also offer you better image appearance at the same pixel density no matter the image size, near to zero pixelation, balanced brightness, and better image/colour uniformity: the optical projection display.

An optical projection display solution comprises a powerful projector and an advanced optical projection screen with a built-in high-contrast filter that makes the display super tolerant to ambient light. LED tiles don’t feature light rejecting ability, so to have contrast the brightness needs to be increased to an uncomfortable viewer level. With the combination of a powerful high lumens projector, Lumina Projection Screens delivers excellent contrast and brightness that can match LED displays in most indoor situations.

LED solutions deliver super-high image brightness, which is good for outdoor-use but creates an uncomfortable viewing experience for indoor-use – especially for a longer period of time. For human vision, images are not supposed to exceed 3x the ambient environment. Beyond that, the eye is fatigued quickly and can even be painful. You can choose to lower the LEDs display brightness, but you will also lose the contrast advantage and the pixels will also become much more apparent.

In terms of costs, the initial investment for a direct view display LED wall is very high, due to the high cost of the panels and much more complex installation. At the same time, LED generates more heat, use significantly more power and requires much more ventilation and frequent service than a projection screen.

Due to the fact that an LED displays have very small areas that light up compared to projection, and there is a much higher chance the image will be interrupted with black lines between the LEDs (pixels). This greatly increases the viewing distances, make the pixels stand out individually, making the image a “picture of dots”, also described as pixelation. Most LED’s offer a relatively low resolution compared to an optical screen.

Another potential issue with the multi-panel LED displays is the mechanical alignment between LED tiles, which can result in disruptive lines in the image. On top of that, it’s not so rare to see a single panel that has either gone dark or shows color shift or is missing a color channel altogether.

Image quality from a projection is simply far superior in uniformity and color rendition across the entire image since the image comes from a single source rather than from a large quantity of self-driven cabinets. An optical projection display is simply much cheaper to acquire and maintain, they do not need advanced controlling software to run, they are relatively easy to install, color uniformity is much better and the maintenance is much easier.

The more electrical components you have in a display system, the higher the chances of something eventually failing. This presents numerous problems, one of which being the sporadic cost of replacements that may not be subject to the same economies of scale that your initial unit cost benefited from. It is also worth considering that there may come a time when the manufacturer of your chosen screen discontinues production, potentially putting an expiry date on your investment. When it serves a business purpose such as advertising a new offer in your store, you obviously want to get the most use from your investment, so with a screen failure is a likely outcome in time, LED Screens are proven as not ideal, especially if the failure occurs in a screen that happens to display important information.

However, a projection system’s electronic makeup is usually confined to a single projector, limiting the risk of failure compared to that of LED screens. Also, whilst a projection system may require duality to work, most do not require exclusivity between the screen and projector. This makes upgrading much easier, as customers can often upgrade the screen or projector without having to upgrade the other.

Therefore, purchasing a projection screen would be a much better choice in terms of cost-efficiency, maintenance, and image uniformity as well.  Lumina Screens provide an ensemble variety of projection screens that could suit according to your wall space, in order to give you an immersive experience and high-performance efficiency with time-bound delivery service.