Digital Projectors You Need To Know Before Buying Your First Projector 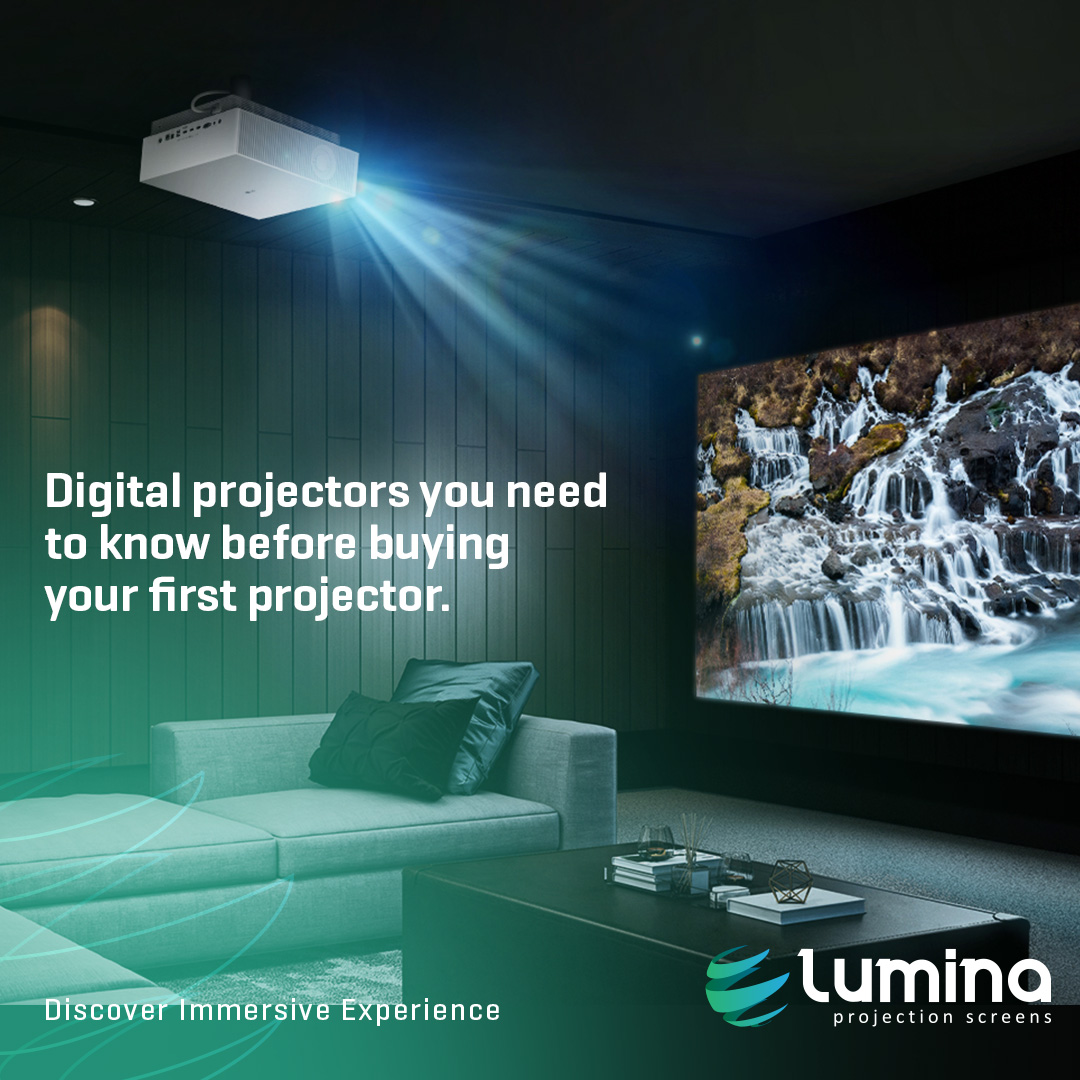 If there’s a product that’s being paid great attention to after the home theatre projection screens, it’s Digital Projectors. Those who are planning their home theatre setup would be curious to know the kind of projectors that are available out there before they pick one for themselves.

But before that, if you’ve been living in the woods and unaware of what digital projectors are, let us ask you a simple question. Have you seen that device that’s always placed in front of the projector screens (not too close though)? The device is the source of light directed to the projection screen. It’s present across all the seminar halls, conference rooms, auditoriums, offices and classrooms where you watch presentations or a movie or an online class. That system is digital projectors.

Putting it across in the formal language, it’s a digital projection display system that connects the computers or any other device and projects the video output onto the projection screen. The display that is projected through the digital projectors is an enlarged image version. They could be fixed onto a ceiling, or placed on a table or a stand.

Let’s shed some light on what kind of digital projectors are available out there.

We can call DLP one-chip or three-chip. One-chip DLP projectors are capable of producing 16 million colours while three-chip models can churn out more than 35 trillion colours. The millions of mirrors residing in each chip help reflect light thousands of times each second. DLP’s ability to produce and reflect light on such huge parameters is what makes it provide a more lively, natural and impeccable image experience to the audience. The setup of this type of projector has one physical colour wheel to generate sequential colours.

It is most suitable for environments with natural ambient lighting such as classrooms.

Some of the most common places it is used for are:

– At Conference halls for delivering presentations

– At telecommunication and utility companies

– At classrooms for lectures

Unlike DLP projectors, LCD projectors utilize polarized mirrors and reflect only some colours of light. As the name itself indicates, it uses liquid crystal display technology which is found in televisions and monitors usually.

LCD follows multiple steps to produce images that are cast via three primary colours—red, green and blue. It takes all these colours to simultaneously work to project a complete image on the projection screen.

Apart from this, LCD has no rainbow effect. It rather has an edge over other projectors as there are no moving parts in its imaging system. If you’re looking for a remotely workable projector, LCD is a better option.

Also, it holds the power to produce brighter images, vibrant colours even in a fully lit room and focused images. Keeping in mind its qualities, it is most popularly used in schools, exhibitions, and home theatres.

Other kinds of projectors:

LEDs are known to be high-quality projectors that are easily connectable with devices like mobiles, laptops, computers, smart TVs. The LEDs also make for a much better lifespan of over 20,000 hours as compared to the traditional projector bulbs. With LEDs, the projector’s lamp is replaced by red, blue and green LEDs which means there’s no necessity for colour wheels anymore. The absence of colour wheels also eliminates the rainbow effect and the noise created by the wheel.

Since they are equipped with LED light projections, the quality of images and videos is guaranteed. You could mount them to ceilings or also use them in the portable format.

This projector uses LCD chips but instead of letting the light get through the chip like an LCD projector, it reflects the light. Since the reflective light helps to flow together and hence produces a much smoother picture without any screen door effect, this technology is definitely superior to the transparent technology of LCD projectors.

LCoS Projectors are the ultimate high-end projectors and thus are more expensive than DLP and LCD.

These projectors are best used as micro projectors, holographic projectors and rooms where there are near-to-eye viewing systems.

As the name itself suggests, these are ultra-portable, small (some of them being just the size of your smartphones), and a substitute for a computer monitor you can carry along anywhere. The hardware and software used in them are miniaturized to fit into the model. Since they typically range from 25 to 1500 lumens, they may lack optical zoom which means you may have to compromise on your desired image size.

They are also known as handheld, mobile, pico projectors or mini beamers.

Multimedia projectors are used for wider purposes from PowerPoint presentations to video clips at weddings.

Just like the pocket projectors, they are also portable weighing around 3 pounds and more, depending upon the model. While their brightness ranges from 2500 to 4500 lumens, their zoom lenses range from 1.2x to 1.5x. When it comes to resolutions, multimedia projectors follow computer (VESA) resolutions over SD or HD video resolutions. Some of them also support wireless presentational functionality.

These were some of the most important and commonly used digital projector types.

While choosing any of them, we need you to understand 3 important parameters to make a well-informed choice:

How do you decide the type of lenses to go for? If your projector has to be positioned closer to the screen, go for a short-throw lens. If the projector is away from the screen by a good distance, a long-throw lens would be a good choice. Simply put, the distance between the projector and the screens (and also the screen size) is what needs to be taken into consideration while choosing lenses.

There is always a war going on between HDR10 & Dolby Vision as alternative standards. Keep in mind that for HDR to be operational at its best, you will need the entire HDR chain from the Blu-ray player, set-top box, streaming device, the projector and everything — to support the same HDR standard.

That’s it from us for today. We hope this discussion helped you introduce yourself to each projector type and get an idea of what you might want to go for.

With that being said, you will need a great quality projection screen to compliment the digital projector that you opt for. Here’s where you can take a look at the most effectively manufactured and loved home theatre projection screens in India: Lumina Screens.