HDR vs. SDR: How Different is the Experience? 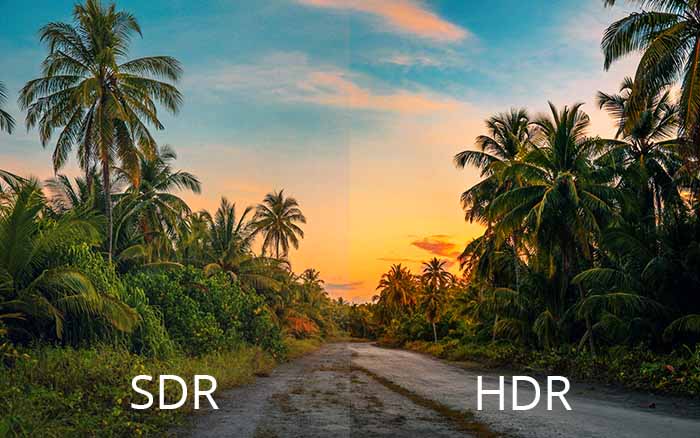 When comparing recent projection screens to the older models, one of the biggest differences between the two is the widespread ability to read an HDR signal.

How important is HDR, though?

And is it worth upgrading for?

Unlike the upgrade from 1080p to 4K, the difference between the two has little to do with the environment it is viewed in.

HDR stands for High Dynamic Range. The term has been used for a long time now, but nowadays when talking about HDR video, it is entirely about metadata. Well, what is metadata then? HDR metadata is simply additional information sent with the video signal, that tells the TV how to display the content properly. Metadata is then distributed, through one of many different standards, including HDR10, HDR10+, and Dolby Vision.

Where SDR still supports an old color standard that relies on Rec 709 color gamut, which is an outdated standard that provides limited dynamic range and smaller color gamut. The colors on the SDR projection screen looks slightly muted with lower brightness and underexposure contrast level.

Much like color gamut, color depth refers to the different colors a projection screen can display. The difference between the two can be a bit confusing. Color gamut refers to the level of saturation the projection screen can display, while color depth refers to the number of colors the screen is capable of showing within that palette. A limited color gamut would stop a screen from displaying the red of an apple accurately, while a limitation in color depth would make the red gradients on that apple look uneven and with visible steps.

Color depth affects gradients the most: a display with a lower bit depth will have to spread it over a far smaller amount of steps. A limited bit depth can lead to blockiness and uneven gradients, which is often the case on the SDR projection screen.

Finally, we take a look at the dynamic range. This is where the HDR projection screen will show the biggest difference. HDR content makes use of their higher brightness capabilities to show life-like highlights. When a TV has a limited dynamic range, it can only display highlights while crushing the dark elements and vice versa. A projection screen with a higher dynamic range is capable of displaying more of both at the same time. Peak brightness, contrast as well as the quality of the tone mapping have the biggest impact on this aspect.

In the grand scheme of things, HDR is arguably one of the greatest improvements in recent projection screens. As technology has improved in recent years, the high-end projection screen is getting much brighter and can display much wider color gamuts than ever before. You won’t gain much visually from having an HDR signal sent to mid-range screens since any picture quality enhancements are reliant on the capabilities of the set itself. High-end models see a significant benefit.