10 Must-Watch Movies on your Home Theatre for Their Brilliant Visual Storytelling! 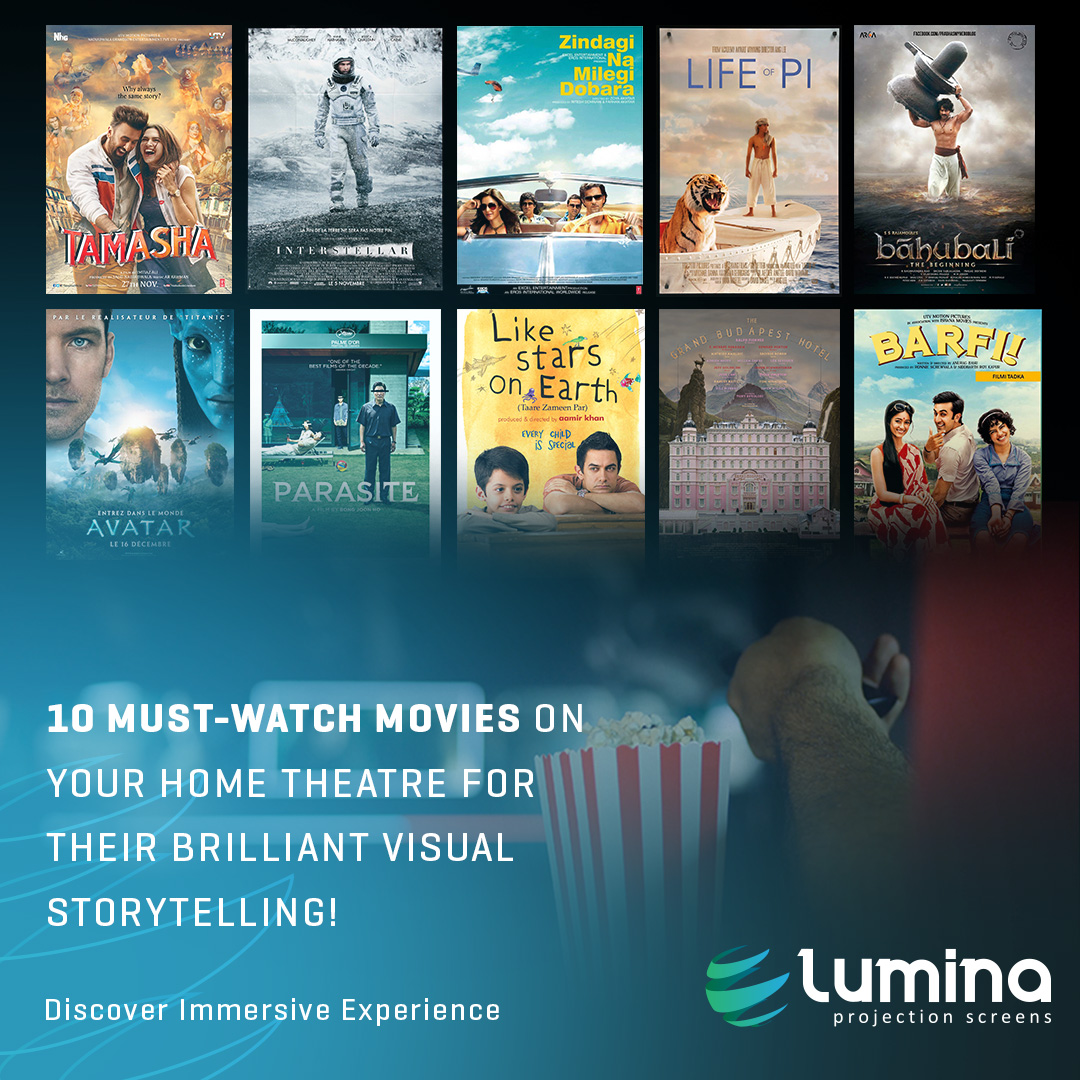 If we ask, what is the one thing you watch movies for?

It wouldn’t come as a surprise if you reply – Story! Because that’s what everyone’s top priority is. But what if we share with you some movies whose visuals are just as appealing (if not more) as the storyline is!

Movies are indeed a powerful medium to witness visual storytelling!

Sometimes, we fail to acknowledge how gorgeous the visuals of some movies could be and how they make for a very meaningful addition to the story!

And let us tell you some movies have such stunning visuals that you and we can get lost in their beauty and might totally forget to pay attention to the sound. (Yes, no kidding!)

That’s what we are here to share with you today!

Let’s dive deep into getting to know some brilliant visual storytelling movies!

This is an interesting tale of two strangers who fall in love with each other on a holiday in Corsica while they decide to keep their real identities hidden. Directed by Imtiaz Ali who is loved for his beautiful storytelling. It was not shot in 1 or 2 locations but 6 of them! Be it the island of Corsica or the mountains of Himachal Pradesh, the movie truly makes you wish you were there experiencing the thrill yourself!

It’s not possible to not mention ‘Interstellar’ when we are talking about ‘visuals’. Christopher Nolan’s direction is undoubtedly one of the most visually appealing movies of the last decade. While Elon Musk is finding a new planet for humans in real life, this movie carrying the same curiosity takes the audience on a journey to explore new planets – a new galaxy!

Here’s the twist – the movie has been shot on real-life locations (and not an artificial set) around the world but totally traps you into believing that it’s a different planet altogether.

While the movie has a powerful message presented through great music, humor, drama, we can’t resist but fall in love with all the places they plan to visit – Costa Brava, Seville & Pamplona. Be it the deep-sea diving, la Tomatina festival, or even the serene beauty of nature shown in the song ‘Khwabon Ke Parindey’, we bet you are going to fall in love with all of them!

Unless you live in some jungle or are stuck in the stone age, you would definitely know about this masterpiece!

Stories to reality through impeccable visuals of a boy with ‘A Tiger’ stuck on a ship. Not to miss, the Sea is nothing less than a massive creature that glows so stunningly throughout the film.

Hands down, this story of a young Indian boy surviving a shipwreck on a small lifeboat along with a Bengal Tiger is one of the most beautiful visually appealing movies you will ever come across!

From the jaw dropping waterfall scenes to the scenic nature to intense war scenes, Baahubali managed to ace each of them.

This epic action drama directed by S.S.Rajamouli and starrer Prabhas, Rana Daggubati, Anushka Shetty & Tamannaah was the most expensive indian film ever at its time of the release.

Also, the movie that gave birth to the most asked question on the internet – why Kattappa killed Baahubali?

Before we tell you what the movie is about, let us tell you a surprising fact! After watching Avatar, fans expressed how desperately they wanted Pandora (the alien world shown in the film) to be real!

This statement speaks for the visuals and its impact this movie left on the audience.

At Lumina Screens, we believe that a projection screen is much more than a white cloth and these are the kind of movies that justify our belief even stronger.

This sci-fi phenomenon directed by James Cameron is the story of a marine unit on a mission to visit the world of aliens – Pandora that leaves them with some great challenges to tackle between their heart and their duty.

Parasite garnered the much deserved attention when it premiered at 2019 Cannes Films Festival where it became the first South Korean film to win Palme d’Or.

Relatively different and the subtle visual representation of this movie to show how the Greed and Class discrimination threatens society and the relationships between the poor and the rich.

The deep and meaningful visuals show this dark side of society like no one ever could.

An unconventional story of a typical Indian household where you get to dive into the world of a struggling school student who finds himself different from the kids of his age!

The way this movie manages to capture Ishan’s imagination and brings life into them through the visuals is something that will leave you awestruck every time you watch it. The amazing direction by the lead actor, Aamir Khan himself takes you through the life of a dyslexic student and his every day challenges.

Although this movie may not be on the ‘must-watch list of everyone yet it’s something that grabs your attention just with its aesthetic visuals!

A dramatic tale of how the head concierge of the hotel is blamed for the murder of a guest and how he has to prove his innocence now. This story is carried through visuals that have a unique blend of color palettes, shots captured that exactly define the characters, and a bold approach to presenting everything.

Can we call this beautiful film visual poetry?

It’s a movie that’s truly a treat to your eyes and will make you wonder how each scene is designed so thoughtfully.

Coming from a director like Anurag Basu, Barfi is an effortless attempt to tell the story of Murphy and his relationship with two women, Shruti & Jhilmil.

Although intense in some scenes, it’s presented through the visuals that felt most lively!

So these were all the breathtaking movies we wanted to share with you! Do you have any such films to share with us? Let us know in the comments below!